Back in 2014, Naval Ravikant wrote about the possibility of “a new generation of Appcoins that can be created as open source software, crowdfunded into existence, and go public on day one. They can run networks where Bitcoin may not work, or where separate funding and compensation is needed.”

Six years later, Ravikant’s predictions appear to have come true. There are currently thousands of different currencies, tokens, and forks listed on CoinMarketCap today. While many of these tokens are unlikely to survive, there are more interesting projects and currencies to explore, with applications ranging from international money transfer to decentralized gaming.

For investors and users interested in cryptocurrencies, the sheer number of coins introduces its own set of problems. Owning different tokens built on top of different protocols can create a mess of wallets, private keys and passwords to juggle between. For everyday users, it approaches a nightmarish experience.

That’s where multi-cryptocurrency wallets come in. They allow users to store different coins in a single place. We put together this guide to help you pick the best wallet based on these two axes:

We put together this guide to help you pick the best multi-cryptocurrency wallet based on security, convenience, and usability. Let’s dig in.

The Best Multi-Cryptocurrency Wallet for Most People

For most people who want the convenience of holding multiple cryptocurrencies in one place, we recommend Exodus Wallet. Exodus Wallet supports 110+ currencies, contains reasonable security guarantees for a desktop wallet, and includes a built-in exchange in the wallet, and an accompanying mobile app. Exodus also has the slickest and most user-friendly guide out of all the desktop wallets we tested. 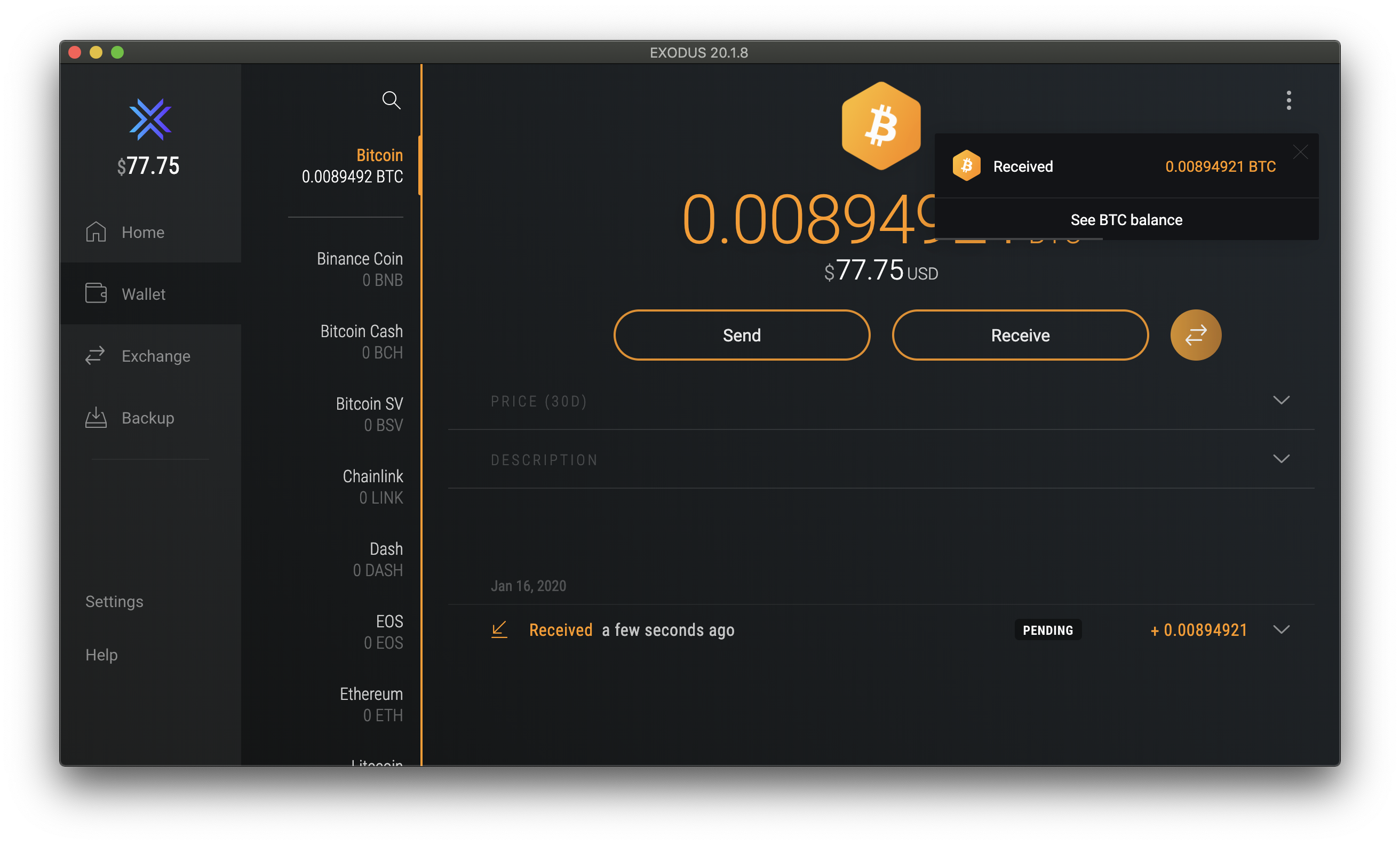 Exodus wallet allows you to receive and send multiple cryptocurrencies from the same place.

Most of the other multi-cryptocurrency wallets we researched, such as Jaxx and Coinomi, have suffered from hacks or vulnerabilities that have resulted in lost user funds. Exodus has not, which gives us another reason to like it—although that doesn’t mean it can’t be exploited in the future.

It’s important to keep in mind that software wallets, be they on desktop or mobile, are very vulnerable to attack. A user of the Coinomi Wallet, for example, allegedly lost between $60K-70K worth of crypto because the wallet sent his local password to a Google API spell checker. Even barring unintended vulnerabilities in the software, since most software wallets store your private key on your device, your coins are only as secure as that device. If you're worried about the security of your funds on a desktop wallet, Exodus does have an integration with the Trezor hardware wallet.

The Exodus team is also transparent about the wallet’s shortcomings. In a blog post, they write:

Finally, and most importantly, if you are storing large amounts of crypto assets do not use Exodus.

What’s considered a “large amount” is subjective — only you will be able to determine what this means for your particular situation. For storing assets outside of Exodus we recommend, and personally use, hardware-based wallets such as a Ledger, Trezor, or KeepKey.

In addition to the core wallet functionality, Exodus includes a couple of useful additional features, such as a slickly designed portfolio tracker that allows you to see the current price of coins in your portfolio. Exodus also includes a built-in exchange, which can be useful for occasionally swapping one currency into another. Due to high fees, we don’t recommend this feature for trading or everyday use. 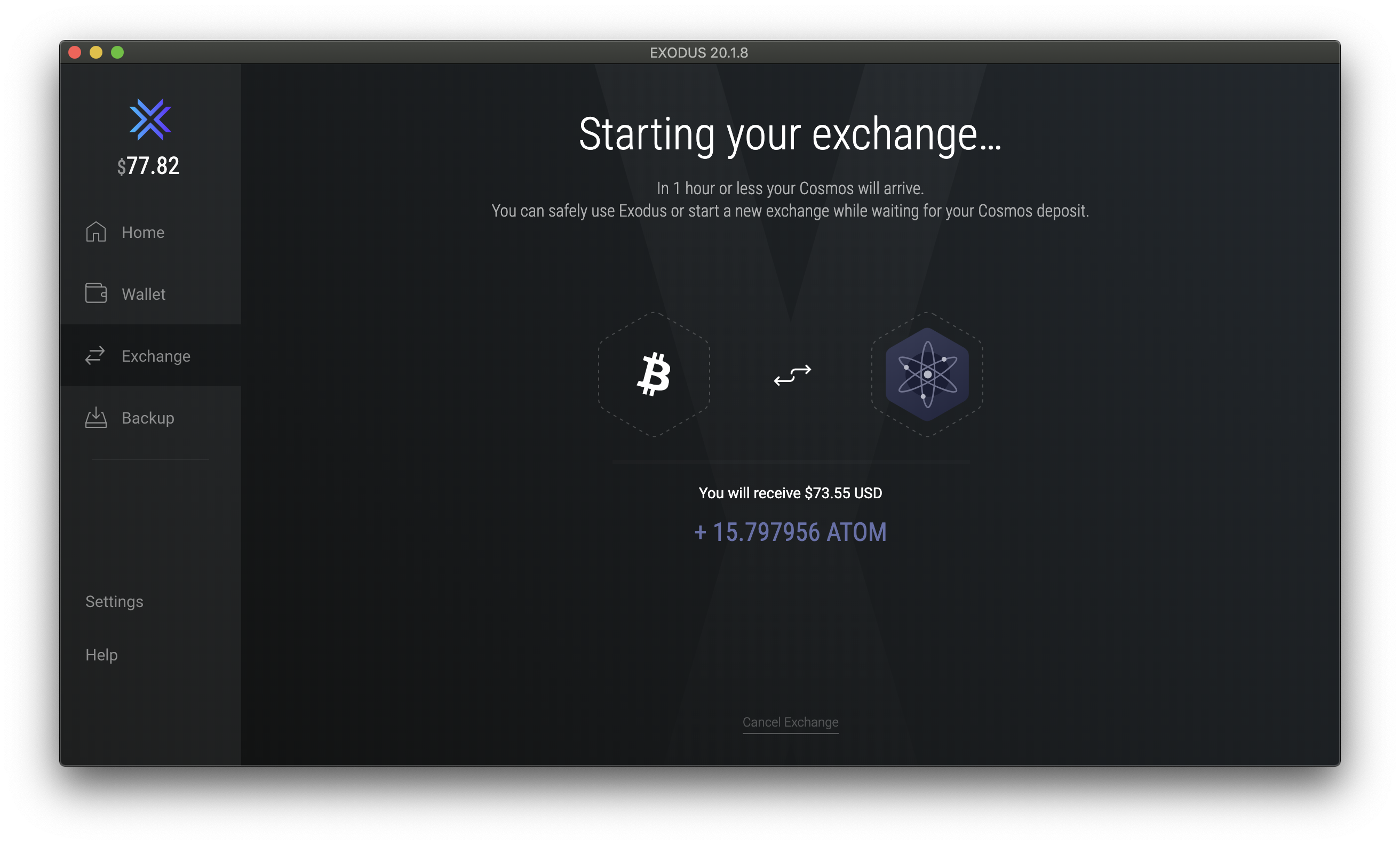 Exchanging Bitcoin for Atom in Exodus

On Exodus, we exchanged ~0.0089 BTC for 15.79 ATOM, which was roughly 4% higher than the price of 0.0005340 ATOM/BTC on Binance at the same time. On its support site, Exodus is open about the fact that it makes money by charging a spread on exchanges that can range anywhere from 2-4%. While that might not matter that much for small transactions, it quickly adds up, and we recommend that you use an exchange rather than Exodus to buy and sell crypto.

If you want to experiment with other multi-cryptocurrency wallets, Jaxx Liberty wallet is another good option that has a desktop and mobile applications, as well as a built-in exchange feature. We didn’t select Jaxx as our pick for the best multi-currency wallet because the design felt a lot clunkier and more difficult to use than Exodus, and it also supports fewer currencies.

If you’re an investor with a significant amount of funds in crypto, we highly recommend using a hardware wallet to keep them safe. It’s not the most convenient option because you have to connect the device to a laptop or a phone each time you want to send a transaction—but it is the most secure. 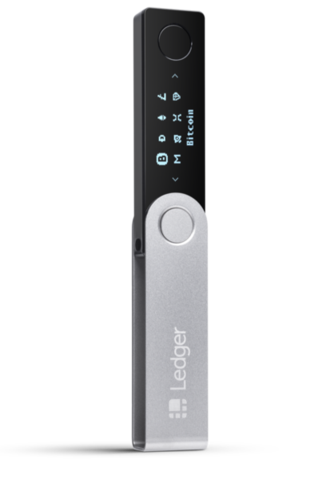 With a desktop or mobile wallet, your private keys are stored on your device, so they are only as secure as that device and are susceptible to hacking. A cold storage wallet like the Ledger Nano X stores your private keys on a device that isn’t connected to the internet, which makes it a lot harder to exploit.

We also like Ledger because it supports a wide range of cryptocurrencies—over 22 different crypto assets and 1,200 ERC-20 tokens.

To view your portfolio, send transactions, and exchange currencies, Ledger has developed an easy-to-use desktop and mobile app called Ledger Live. If you don't need the mobile app, you can op

While it can be annoying connecting your hardware device and typing your passcode each time you want to access funds, the design of Ledger Live makes the process of actually managing and sending your funds relatively easy and intuitive. It also gives you the option to buy or trade crypto via a number of different exchange services.

We like the Ledger Nano X more than the earlier Ledger Nano S model because it has more storage - allowing you to have over 100 "apps" installed, which are necessary to manage different wallets. It also provides bluetooth connectivity with the Ledger Live mobile app, allowing you to access your funds on the go. The Ledger Nano X typically has enough storage for 3-4 apps, forcing you to delete and reinstall apps to manage different currencies, and it doesn't support mobile usage.

While other cold wallet manufacturers such as Trezor also offer good hardware wallet options, we recommend Ledger because it offers an easy-to-use desktop application that helps you manage your crypto. We also found that Ledger typically supports new currencies faster than Trezor.

For most people who want to use a multi-cryptocurrency wallet on the go, we recommend Trust Wallet because it strikes a good balance between supporting many different cryptocurrencies while also including an impressive level of functionality, including a DApp browser, a decentralized exchange, and even the ability to stake certain proof-of-stake tokens.

If you're already using a desktop wallet like Exodus or Jax, you may be better served using their mobile apps. But if you're looking for a mobile only-solution, or want extra features like the ability to interact with Dapps from your phone, Trust Wallet provides a far more powerful solution.

From a security perspective, Trust Wallet gives you custody of your own funds, meaning your private keys remain on your device. If your device is compromised, your private keys and funds can be, too. In practice, mobile wallets are typically more secure than desktop wallets because it’s harder to access root-level permissions for the device, especially on iOS.

Trust Wallet currently supports 42 different tokens while also providing you with an interface to interact with the Ethereum ecosystem, from ERC-20 tokens to collectible ERC-721 tokens.

Within the application, next to your coins is a tab that shows you various ERC-20 collectibles that you own. You also have the ability to interact with DApps using your Ethereum address to sign transactions using Trust Wallet’s DApp browser.

Trust Wallet provides several nice features for interacting with Dapps, from a dedicated pane that shows all your collectible tokens to a Dapp browser.

Trust Wallet is integrated with Binance’s Decentralized Exchange (DEX), which allows you to swap between different assets on your phone. While the feature is cool and well-designed, the supported markets don’t have a lot of liquidity, so users pay more on the spread than with a regular, centralized exchange.

In Trust Wallet, we were able to stake Atom in seconds, with just a couple of taps.

For proof-of-stake currencies like Cosmos and Tezos, Trust Wallet also supports staking. Via Trust Wallet, you can essentially delegate your tokens to a validator and earn interest for staking those tokens. Trust Wallet advertised an 11% APR for staking ATOM. In practice, we found it to be quite a bit lower, at 6.3%, staking 15.79 ATOM via the Certus One validator.

Overall, Trust Wallet packs an impressive level of functionality into an easy-to-use app. It may be easier to interact with Dapps from a metamask wallet or cheaper to exchange funds from a centralized exchange, but Trust Wallet wraps all of this up into a single, slick interface accessible from your fingertips. 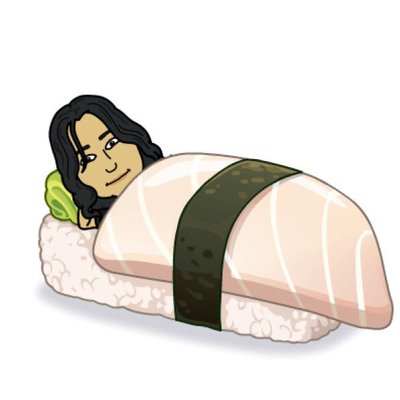